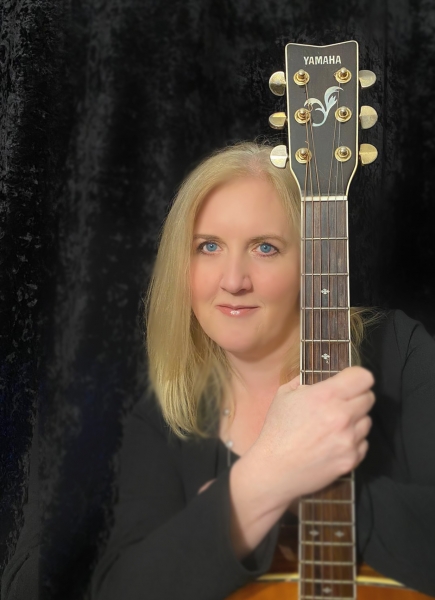 Teresa Recently Scored her First Number 1 Single after Joining Forces with Downdaroad Productions With The Brandy Clarke Song “Hold my Hand” The track is the follow-up to Teresa Marie's August 2020 debut single, the critically received Take Me Home, which first brought the Northampton born chanteuse to the attention of Irish country music fans. And as Teresa Marie explains, it was love at first listen as soon as she heard the song... "I first heard 'Hold My Hand' when Mike Gleeson, of Downda Road Productions - who I'm delighted to be working with - sent it my way. He knew I was still kind of searching for the song that might become my next single, and sure enough, his instinct on this one was spot on! And the funny thing is, I'm actually a big fan of Brandy Clark, but this song somehow just passed under my radar. Anyway, I loved it straight away. In fact, I actually went and found an instrumental version of it, used that to sing a verse into my phone, and sent it straight back to Mike! And I think that sealed the deal for both of us. I was sure at that stage that Mike knew exactly the side of me that I was trying to express as an artist, and that just made me so excited to be a part of this project with Downda Road. And thank God he liked my instant-demo too! [Laughs].

So we knew we'd found the next single for sure. I literally fell in love with the song straight away. The melody really got into my head, so much so, that I was dreaming about the song and singing it in my sleep! [laughs]."

While Take Me Home and Hold My Hand are presenting Teresa Marie's talent to a national audience for the first time, she's already a prominent figure on the country scene in the west of Ireland...

Hold My Hand is an immaculate cover version, but it seems only a matter of time before fans are treated to another original release from an artist who lists such songwriting greats as Dolly Parton and Lori McKenna among her greatest influences in that regard. On the occasion of the 100th anniversary of its meeting its tragic fate in 1912, Teresa Marie penned a somewhat haunting tribute to fourteen people from her Mayo hometown of Lahardane who were on-board the Titanic, amongst them, the grand-uncle of Teresa Marie's husband, Patrick. The song, called Water Is Black, featured on the RTE documentary Addergoole 14, and was performed by Teresa Marie on Nationwide and Sky. Downda Road were thrilled that this single featured the exceptional gifts of Gillian Tuite on this record too. Gillian has long been one of our favourite Irish artists, and it's great to see so many people now beginning to recognise her talents as well. Any praise that comes her way is more than well deserved. Having Gillian sing harmonies on this project with Teresa Marie, as well as playing guitar on it too, is something we were delighted could happen."